Reading for the enlightened heathen…

...or perhaps just more circumstances of pagan barbarity that we can scarcely bring ourselves to believe as taking place in the 21st century.
Our Online Store

Also, Háliggyld Wares, our Teespring shop, offers shirts, banners, and other items featuring the Anglo-Saxon inspired cover art from our growing collection of publications on Germanic Heathenry and Théodish Belief.

First published in 1991, Wordsmiðes Iċ Spræce Angel-Seax! A Beginning Anglo-Saxon Grammar for Children is, to our knowledge, the first Old English introductory course written for children — certainly the first written for Heathen children. This facsimile edition has been faithfully scanned from one of the few remaining originals and the accompanying audiotape has been digitized for contemporary listening devices. Although this work was originally written for children, it can easily double as a first introduction to Old English for adults.

Like the cover art? T-shirts, tumblers, and tapestries featuring the cover art can be purchased through Háliggyld Wares, our online Teespring shop. 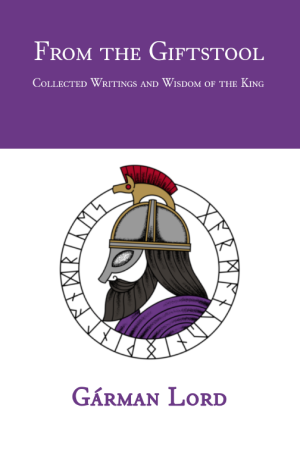 From the Giftstool: Collected Writings and Wisdom of the King by Gárman Lord. 90 pages. $16 Released September 2021.

This work follows in the footsteps of Gesíþa Handbook: An Introduction to Théodish Belief and Other Writings of Gárman Lord on Anglo-Saxon Théodish Belief (2018) and might well be thought of as its sequel. Like the aforementioned book, From the Giftstool: Collected Writings and Wisdom of the King is an anthology of Gárman Lord’s more influential articles penned between 1989 and 2020. Many of the chapters herein were first published in the pages of such heathen periodicals as Mountain Thunder and Spellstów. Moreover, a handful were first posted to the Wínland Ríce’s former online public forum, Uthwitegan Hall. 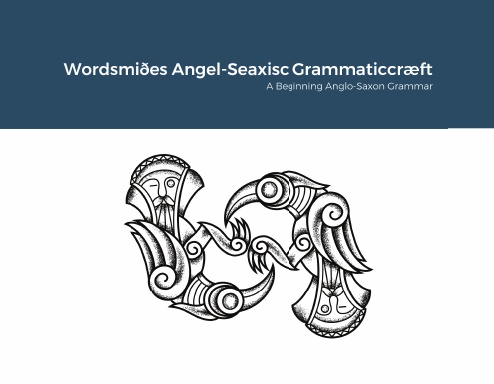 First published in 1992, Wordsmiðes Angel-Seaxisc Grammaticcræft is an Old English introductory course written by Wordsmið Þegn, who alongside Gárman Lord, Ælfwyne Þygen, Æᵹili Þegn, and Werwulf Þegn, was a member of Théodish Belief’s first fellowship, the Witan Théod. Nearly thirty years since its original printing, Háliggyld Books is honored to republish Wordsmith’s work in this facsimile edition. It is our hope that this beginner’s guide will, once again, speed new Théodsmen in their understanding of the Old English language that was spoken by their ancient Anglo-Saxon ancestors.

Like the cover art? T-shirts, tumblers, and tapestries featuring the cover art can be purchased through Háliggyld Wares, our online Teespring shop. 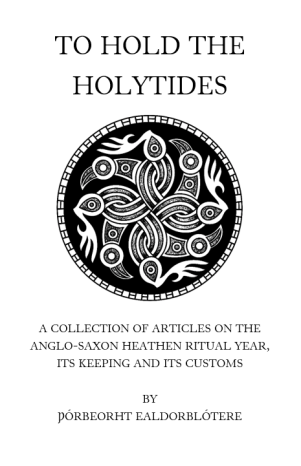 To Hold the Holytides: A Collection of Articles on the Anglo-Saxon Heathen Ritual Year, Its Keeping and Its Customs by Þórbeorht Ealdorblótere. 158 pages. $18. Released November 2020.

To Hold the Holytides is a collection of Théodish writings on the Anglo-Saxon heathen ritual year that explores how many pre-Christian customs were kept alive in both the seasonal celebrations of the Anglican church and in the folk traditions of the English countryside. Moreover, this work affords the contemporary reader a rare glimpse into how such ancient thews have been rekindled and put into practice by Anglo-Saxon Théodsmen today. As a companion to By the Sun, the Stars, and the Moon: Anglo-Saxon Heathen Time-keeping, this book also includes articles on how the dates for such heathen holytides as Módraniht, Éastre, Midsumor, and Winterfylleþ are determined and as well as observations on the span of Yuletide as it was held in Anglo-Saxon England. 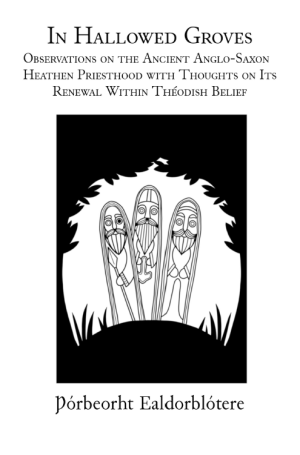 In Hallowed Groves: Observations on the Ancient Anglo-Saxon Heathen Priesthood with Thoughts on Its Renewal Within Théodish Belief by Þórbeorht Ealdorblótere. 76 pages. $15. Released April 2020.

Written by the Ealdorblótere (chief priest) of the Ealdríce holy-guild of the Wínland Ríce, In Hallowed Groves is a collection of ten articles which explore primary source accounts of the Germanic heathen priesthood with the aim of furthering its reconstruction in Théodism today.

Revised & Expanded Second Edition (March 2021): The chapter “On the Scarcity of Sacerdotes” has been revised and a new chapter, “On Hæl and Hléot” has been added.

Eald Englisc Gealdrabóc: Old English Gealdors of the Ealdríce Háliggyld compiles many of Old English  biddings and gealdors used by the Ealdríce to fain the gods and goddesses throughout the year.

By the Sun, the Stars, and the Moon: Anglo-Saxon Heathen Time-keeping by Þórbeorht Ealdorblótere. 70 pages. $12. Released June 2019.

By the Sun, the Stars and the Moon offers the reader an overview of how Anglo-Saxon heathens kept time before Christianity introduced the Roman calendar. Found within its pages are reference charts for the times of the day, days of the week, months of the year, and seasons of the year. Also included are Þórbeorht’s translation of Bede’s “De mensibus Anglorum” (“The Months of the English”) and the Ealdríce‘s reconstruction of the Anglo-Saxon lunisolar calendar for every year of the current Metonic cycle (2010 to 2028).

These are the Old Saxon rites that were used by the Sahsisk Thiod (2000-2008 CE), a Greater Théodish fellowship which sought to rekindle the heathen troth once held by the continental Saxons of Northern Germania. In this work may be found some of the first Heathen galders (charms) and biddings (prayers) to be crafted in the Old Saxon tongue since the continental Saxons were forced by Charlemagne to convert to Christianity.

Gesitha Handbook: An Introduction to Théodish Belief is a collection of works written by Gárman Lord, the founder of Anglo-Saxon Théodish Belief (also known as Theodism). Originally published as articles and separate booklets in the early 1990s, these works are being made available in print for the first time in fifteen years. Articles include: “The Undiscovered Retroheathenry,” “The Quest for Troth and Thew,” “The Gesitha Handbook,” and “The Mystery of Heathen Sacrifice.”

Of Ghosts and Godpoles: Theodish Essays Pertaining to the Reconstruction of Saxon Heathen Belief, Both Old and Anglo by Þórbeorht Ealdorblótere. 248 pages. $30.

Of Ghosts and Godpoles is a collection of Théodish essays which cover various topics pertaining to the reconstruction of the Saxon Heathen religion. Beginning with a history of the continental Old Saxons, the book goes on to employ comparative mythology to explore the cult of Sahsnôt/Seaxnéat before utilizing archaeology to glean insight into the Irminsul and its popular representation in contemporary Heathenry. Thereafter, Of Ghosts and Godpoles reexamines the life of Hengest, his portrayal in literature, and his actions within the cultural context of the Migration Era warband. A textual analysis of Beowulf follows, drawing heavily upon linguistic anthropology to consider the significance that ghosts play in the Old English tale. Lastly, the book concludes with an overview of how environmental change set the Teutonic migrations into motion and the impact said migrations had upon the Heathen religion.

Ealdríce Théod is a 501(c)(3) nonprofit religious organization with fully ordained and licensed clergy.
Anglo-Saxon Théodish Belief, also known as Theodism, is a rekindling of the manygodded troth that was held by our Anglo-Saxon heathen forebears before the coming of Christianity